Every year at the height of summer Leicester is brought to life by a Caribbean carnival. It all starts with a parade, dancers wearing colourful and elaborate costumes make their way though the city on their way to Victoria Park where a day long party kicks off.

I'm sure it will come as no surprise that the highlight for me is the food, anything and everything Caribbean is there from fiery curry goat (never called goat curry) to corn on the cob fresh from the barbecue glistening with melted butter. It was here that I discovered Jamaican jerk Chicken, the mixture of herbs, spices and chillies is just delicious and has become one of my favourite foods.

There are hundreds of different recipes for jerk chicken - there is no 'authentic' recipe - the ingredients can vary widely. What every recipe has in common is that they all contain Scotch bonnet chillies, thyme and allspice.

I've been experimenting with different recipes over the years, trying to find one that was just right, most of the recipes I have tried were bland, boring and a bit disappointing. Now at long last I think I have it, a recipe with just the right amount of heat that's flavourful and delicious. 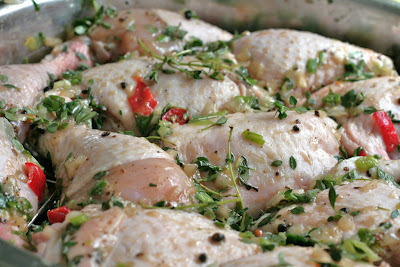 Chicken marinating
I like to cook this on the barbecue when the weathers good, cooking over charcoal not only adds a delicious flavour to the meat it also gives it it's characteristic charred blackened look. In Jamaica they would always use legs or thighs for this, they have much more flavour than breast meat and don't tend to dry out. 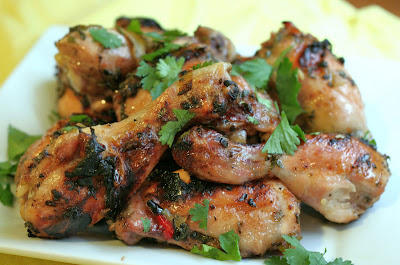 Recipe:
You will need a pestle and mortar or a blender.

Put all the chicken in a large plastic box or a zip-lock plastic bag. Pour the marinade over the chicken then really work it with your hands, you need to get the chicken really well coated and the marinade reall well rubbed in. Now leave it in the fridge for at least 4 hours but anything up to two days is good.

Ideaaly cook the chicken over a charcoal barbecue on a medium heat, other you can cook it in the oven at 180c/350f/gas 4 for about 1 hour, to get the charred skin flash it under a hot grill.

Traditionally served with rice and peas but potato wedges or salad are both good with this.
Posted by Sam at 10:54 am

Very nice! I love good jerk chicken, and this one looks delicious.

Now that jerk chicken looks good! I will have to have a go at making this one - I have it bookmarked!

That looks wonderful! I tend to just use the Walkerswood jerk seasoning. I have a really good Caribbean cookery book that has the BEST jerk burger recipe in it. Let me know if you want it!

saute the onions, garlic and mushrooms in the butter & deglaze with the rum. Mix the mushroom mixture with the rest of the ingredients. Make into 6 fat patties, cover with clingfilm and rest for at least 30 minutes in the fridge.

Grill or fry, and serve in buns. The recipe recommends rocket and some mustard mixed with a bit more jerk seasoning, but Paul & I reckon that a slice of cheese is absolutely vital.

I always prefer the dark meat from the chicken - so much more flavour.
You look like you've made a great job of this dish

Sounds like a great carnival you have there Sam.
The chicken looks quite wonderful.
Happy Easter!

I've never had jerk chicken but have always wanted to try it. This recipe looks and sounds fantastic!

I like how you've added the onion and scallion to help form a paste so the seasoning really adheres to the chicken in a nice layer. Wonderful!

Yum - that looks delicious. There's a great jerk chicken stall near to my old work but sometimes it's a bit too spicy for me!

That looks like a good recipe! When do we get some fiery curry goat? ;-)

I love jerk chicken. In fact I am rather addicted to it. When I had in Jamaica, I realized how most of what I had ever eaten before called "jerk chicken" was in fact NOT. But now I have seen the light! Yours looks so good!

Foodycat: Thanks for the recipe, I'll be trying that soon it sounds great!

Joy: It's often too spicy for me too! that's why I chickened out of using Scotch Bonnet chillies.

Hopie: Hmm... Goat meat is quite hard to find but if I ever see it I promise I'll make curry goat!

Thanks for the info. Very well written and easy to follow. I have posted a few of my articles on Post a Comment. It's nice because I just link it to my page and when someone searches for anything similar to my article then they recommend mine. They also have some graphs that you can put on your page to help track who's reading your stuff and how helpful they are finding it.