It was a few months ago now since I first saw Willie Harcourt-Cooze on TV espousing the virtues of real chocolate. Willie is an eccentric entrepreneur from Devon whose aim is to produce the worlds finest chocolate, by hand, from bean to bar.

At the age of just 27 Willie went to Venezuela and bought a 1000 acre farm -as you do- and planted it with 50,000 Criollo Cacao trees, widely regarded as being the best and highest quality strain of cocoa. 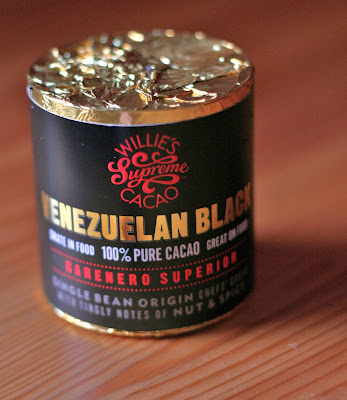 A bar of Venezuelan black 100% cacao
Back in the UK Willie set up his factory and began to produce his first bars under the name Venezualan Black. This is chocolate but not as you know it, the bars are made from 100% pure Cacao, they are not at all sweet and are not meant for eating raw. This chocolate is meant to be used as an ingredient, just like you would use garlic or salt and pepper. In fact Willie puts his cacao into just about everything from pasta and chilli to cakes and desserts.

I finally got hold of some of his cacao a few days ago, the bar I bought was described as having "tingly notes of nut and spice" which makes it sound almost like a bottle of wine.

I plumped for a pot of chilli as my first dish to get the cacao treatment, chocolate is a common ingredient in chilli -i'm sure you knew that- so it seemed like a good place to start. I just used my normal chilli recipe but just before serving I added a handful of grated cacao. The effect was quite astounding, the chilli became deeper, darker and richer and gave a complex and interesting flavour. 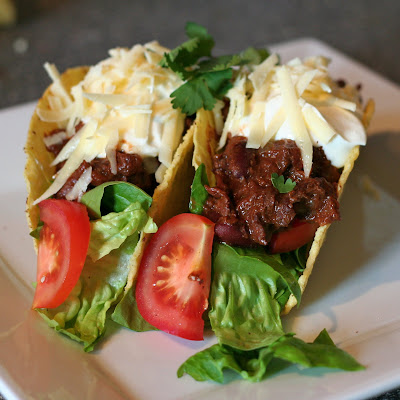 Chocolate chilli tacos with sour cream and cheese
I'm definitely a cacao convert just a small amount can make a massive improvement to a dish like chilli. The downside is that at £6 a bar this stuff is not cheap for now it will have to remain an ingredient for special occasions.

Willies official website can be found here: http://www.williescacao.com/
Posted by Sam at 7:27 am

I have been putting chocolate in my chili for a long time, now--usually just a wee handful of cocoa powder, but this stuff sounds wonderful!

The chili looks so rich! I'm off to check out the website :)

That's an impressive ingredient to have! Your chili looks lovely--I've never made it with chocolate before. It looks delicious.

Wow what a cool ingredient. I've never tried chocolate in chili, but now I want to!

I keep meaning to pick some up in Waitrose, now I've seen this I'll definitely get some!

I've never added cocoa to savory dishes but you have made me want to try. Your tacos look mouth watering good Sam.

I saw all his tv programmes, incredibly interesting. That chilli looks great.

I bought some of this for my mum for Easter after drooling over his tv programmes. I got the one with notes of citrus - made some divine truffles. Will have to try this one myself - its made the chili look so rich. A little goes a long way.

I usually put chocolate in my chilli too and find it makes a real difference. I gave my sister a block of this chocolate for Easter though and bet it lifts the humble chilli into a whole new sphere of deliciousness!

Chocolate can definitely have the subtleties of a fine wine. Wish I'd known about this last weekend when I was in London!

I've debated whether to buy this venezuelan chocolate. It is very expensive.

I read once about chocolate chilli chicken, but I wasn't convinced. Now I think I will look for this book and make it :) Thank you for sharing this.
Margot