A few weeks ago the people at Silver Spoon sent me some of their decorations to make something for Halloween. I had no idea what to make but eventually decided I'd make a pumpkin cake, after all when most people think of Halloween they think of pumpkins... 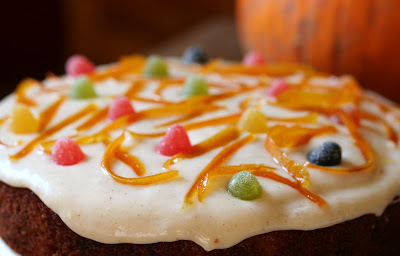 Halloween is almost upon us and while I don't really celebrate it myself I do take full advantage of the piles of the bright orange Halloween pumpkins that are being sold everywhere right now.

Pumpkin can be a delicious vegetable simply roasted with butter and a few herbs or stirred into a rich and creamy risotto. Unfortunately the pumpkins sold for carving are normally grown for size rather than flavour and can be a bit bland and watery, but don't be put off, they still have there uses such as in this pumpkin cake. 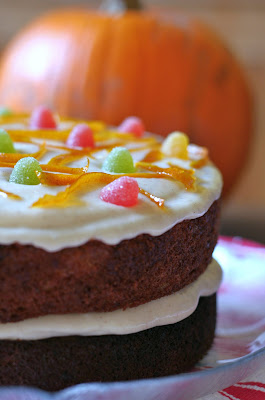 The recipe I used is adapted from a bundt cake recipe I found at Pinch My Salt. I've converted it to a sandwich cake and used yoghurt rather than sour cream for the batter, I don't know how but yoghurt seems to give cakes softer, lighter texture, I use yoghurt in scones too for the same reason. I've also added walnuts to the cake because they just taste so good in this kind of cake. 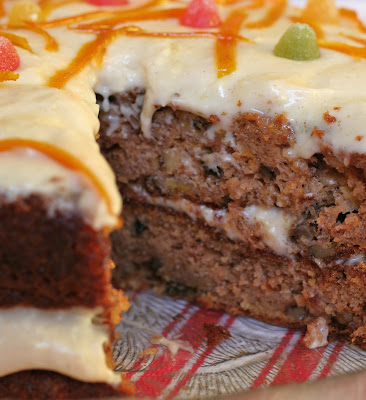 Pumpkin and spices belong together so I've used cream cheese cinnamon icing for this cake topped with candied orange peel and some fruit jellies kindly sent to me by Silver Spoon. The finished cake is very similar in texture to carrot cake but it has a distinctive pumpkin flavour, think of pumpkin pie in cake form and you'll have some idea of what it's like.

So when Halloween is over and your jack o' lanterns are finished with maybe you could give them a second life as a delicious pumpkin cake.
Posted by Sam at 10:04 am

It looks too good to eat! That means we must make it. We love this and will post it on twitter to our followers, they will love it! You can follow all the walnut conversation with us at www.walnutlovers.com. Thanks for the post!

This looks gorgeous and the decoration is very fun. Love the idea of the added walnuts. Yum

This looks mouth wateringly amazing! Do British people celebrate Halloween? Thanks for your comment on my blog, I'm already thinking ahead to Christmas dishes too. :)

How is it that you know about pumpkin pie? Most of my English friends have never tasted it... at least before they meet me. :)

Joie de vivre: Traditionally we don't celebrate Halloween but it is becoming more and more popular, it's still not anywhere near as big as it is in America though.

Camille:I got the recipe for pumpkin pie from a friend of a friend who is American and made it myself. I don't know if ir's anything like an authentic American pumpking pie but it tastes good and that's enough for me!

SAM!
I"m back! and wow have you been busy!! Loving all the beautiful things you've cooked up!
I'll definitely be using some of your recipes!

I love pumpkin pie, and I know this cake would taste just as good. Although I would let someone else eat all the jellies on top!

Fall is all about pumpkins! Love the colourful toppings.

Lovely cake, I noticed they have been bringing out quite a lot of cake decorations recently.

Lovely decorations, and your cake is perfect!

Lovely looking cake - bet it tasted great. I've never warmed to pumpkin as the ones I've tried have never had much flavour - sounds like I need to revisit!

That sounds and looks fab Sam! I refrained from buying a pumpkin this year so will have to save this for next time around! The cakes looks really moist and love the decorations!